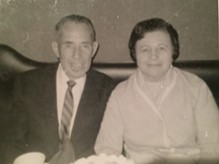 This tax-deductible scholarship has been established by the friends and family of Rose and Victor Rifkin, who were the parents of Rhoda Spiegelman and Doris Tanklow; the grandparents of Ellen Turcotte, Donna Spiegelman, Karen Tanklow and Debra Tanklow; and the great-grandparents of Nessarose and Ariela Schear and Adam Smokler.

This scholarship has been established in honor of the 85th birthday of their daughter, Rhoda Rifkin Spiegelman, and in memory of her sister, Doris Rifkin Tanklow. The sisters are first generation college students who graduated from Brooklyn College, a public 4 year college in Brooklyn, New York, after being educated in the New York City public school system. Both sisters became teachers, and, later, after receiving masters degrees by going to ‘night school’, Rhoda became specialized as a remedial reading teacher and Doris became a high school librarian.

We, the family and friends of Rose and Victor Rifkin and their descendants, wish to honor their memory by establishing this scholarship to support students who have graduated from Cambridge Rindge and Latin School, Cambridge, Massachusetts’ public high school, where their great-granddaughters, Nessarose and Ariela, attended and graduated in 2010 and 2014. We will support the college education of recent alumni from the high school who are first generation and/or low income students who are choosing to pursue college education as their path to attaining the American dream, just as Rose and Victor Rifkin’s daughters, Doris and Rhoda, did.

We invite you to contribute as much or as little as you wish. All contributions are fully tax-deductible and part of the money raised will be invested to ensure the sustainability of the fund in perpetuity. The scholarship will be administered by the descendants of Rose and Victor Rifkin, in collaboration with Friends of Cambridge Rindge and Latin School, a 501(c)3 co-founded by granddaughter Donna Spiegelman and her spouse, Elaine Schear. To learn more about Friends of Cambridge Rindge and Latin School, click here.

We invite you to learn more about Rose and Victor’s life in Byelorus, a country bordering Russia and Ukraine, where they were born, and their immigration to the United States as young adults in 1921 and 1923. Here is a snippet from the oral history of Rose Silbert Rifkin, on her education and family, interviewed by her granddaughter, Donna Spiegelman. Click here to read the entire oral history.

Donna: Tell me about what kind of education you had there. Did your parents have education?

Nana Rose: Hebrew. My mother didn’t have much education.

Donna: Did she have any?

Nana Rose: Probably could write very little in Yiddish. My father was educated in Hebrew and Yiddish. He had a beautiful handwriting. Did you see his handwriting on one of Rhoda’s pictures that he wrote in? I have Rhoda’s picture when she was a baby, so he wrote down the date of her birth.

Donna: Who taught him how to do that? Where did he learn that?

Nana Rose: He went to cheder I suppose. When I was born my parents were forty-seven years old. So I didn’t remember them as young parents. And I was so envious if I see children walk with young parents, but I had to grow up with my parents, and I really loved them and they loved me. In spite of everything, that I was the fourteenth child!

Donna: You didn’t mention fourteen people, did you? 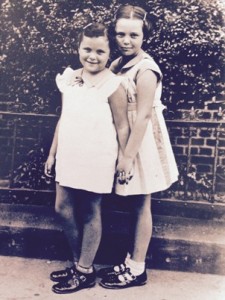 Nana Rose: A lot of them died!

Donna: So why didn’t you tell us about the ones that died?

Nana Rose: Six died and we were remained eight.

Donna: Who were the six that died? What happened to them?

Nana Rose: I don’t remember them, they were all older than me.

Donna: What did they die of?

Donna: You have no idea what your brothers and sisters died of?

Donna: But didn’t anyone ever tell you?

Nana Rose: No, I never asked them. Any epidemic, there were typhus, and there were measles, and at that time we didn’t have any prevention of any kinds of ailments.

Donna: Were they little children when they died?

Donna: What did people say about America?

Nana Rose: Well they thought that America, you come here, you just go with a shovel, you shovel gold. That’s what they called it, golden land.

Donna: What about Papa Vic’s family? Where were they?

Donna: What did his parents do for a living?

Nana Rose: And when he was twelve years old he was the breadwinner for the whole family.

Donna: So how did he earn the bread?

Nana Rose: He used to do the same thing; speculate, whatever he could, he was in a bigger form, he was… he used to deal with…you know the… Oh! Керенский (Kerenskiy) (1). I forgot to mention. That was another… revolutioner. But he was before the Bolsheviks. So he took over, he didn’t exist too long. So that time, the ruble was more expensive than the Kerenskiy. So he used to buy for Kerenskiy money the Russian ruble, and go to different cities and sell it for the bigger amount, you know. And that’s how he made a living.

Rhoda: He was a banker! Donations may also be made by check — make them out to Friends of Cambridge Rindge and Latin School (FOCRLS) and put “Rifkin Scholarship” in the memo line. Checks should be mailed to: FOCRLS, P.O. Box 39-1541, Cambridge, MA 02139.