Influential CRLS Educators Honored by the Class of 2018 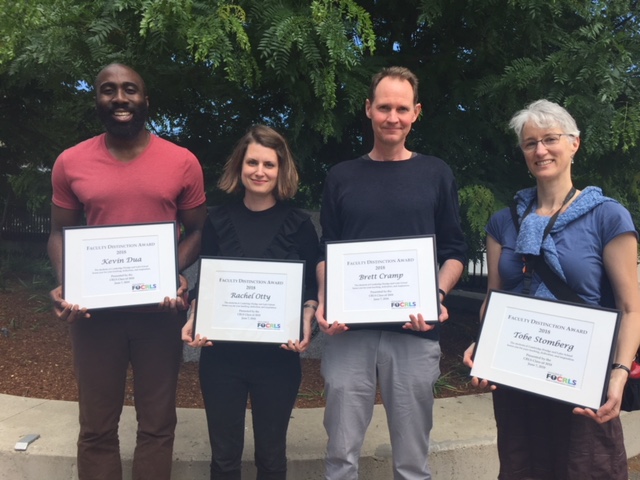 For the 12th consecutive year, seniors nominated four educators who made the greatest impact upon their CRLS experience. Sponsored by Friends of CRLS, the Faculty Distinction Awards were presented by Principal Damon Smith, Senior Class President Leonardo Escobar, Student Body President Sophie Harrington, and Elaine Schear, Executive Director of Friends of CRLS, to rousing cheers as each awardee took the stage at the June 7th commencement.

Kevin Dua, a decorated teacher for almost a decade, was the first African-American to receive the Massachusetts History Teacher of the Year Award (in 2017) and the 2018 recipient of the Dr. Martin Luther King Jr. Service Award. With a B.A. from the College of William and Mary and an M.Ed from Boston College, Mr. Dua’s background has helped students to better their identities in his psychology and history courses this year, which marked his first year at CRLS. Though his life goal is to become U.S. President in 2040, Mr. Dua cites his biggest honor thus far as serving as the faculty advisor for the Black Student Union this year. The anti-racism campaign in schools and trainings, call for more Black and Brown teachers in the district, and celebration of Blackness are positive highlights he attributes to those senior members.

Rachel Otty has taught history at CRLS since 2005.  She has a Bachelor’s Degree in history from Mount Holyoke College and a Master’s Degree through the Boston Teacher Residency program.  She currently teaches 9th grade World History and Modern World History, an elective class that focuses on foreign policy in Eastern Europe, Africa, and the Middle East.  She has written about teaching about Islam and religious literacy for Education Week and PBS and is passionate about teaching her students to challenge assumptions and complicate narratives about the regions and people they study.

Brett Cramp spent nearly a decade working as an actor in New York City before becoming a teacher. He holds degrees from the University of Cincinnati College – Conservatory of Music and from Emerson College. He is a proud member of the CRLS Visual & Performing Arts department who has taught drama classes as and directed musicals, plays and student-created original work. As a drama teacher, he believes in creating a safe and nurturing environment that allows for students to use theatre to speak honestly about the world around them and, as a result, broaden their understanding, deepen their empathy and break their own expectations of themselves. Over the past 15 years, the process of learning to teach (something that never stops) has been and continues to be the most compelling conversation he could ever hope to be in. He is deeply grateful for the opportunity to teach and learn from his students at CRLS.

Tobe Korsgren Stomberg grew up in Cambridge and attended the Pilot School here at CRLS. She studied Human Ecology at Connecticut College and then Forestry and Environmental Studies at Yale University. After spending time working as a forester in New York City and Connecticut, she returned to her Cantabrigian roots and started teaching biology here at CRLS. In her 20 years at CRLS she has taught biology, genetics, AP Environmental Science and most recently, a next generation farming class. She serves as the faculty advisor for the Environmental Action Club and has helped to bring the composting program to our school. Tobe is passionate about her students, her colleagues, and the science courses she teaches. Tobe strives to treat each student as a multifaceted person and supports their learning outside of the classroom. She is looking forward to working on achieving equity for all students and solving our toughest environmental problems.